One of the many old Minor League teams making a small comeback hails from the majestic Pacific Northwest.

With throwback caps becoming more popular in modern use and teams/retailers thumbing through the pages of baseball history to recreate caps from years past, the Walla Walla Padres have enjoyed something of a small renaissance among cap collectors. With offerings from Ebbets Field and a low-key re-release from a current Walla Walla team, the double W has reemerged from baseball history and can be found on caps once again.

Of course I had to reach out to a proper expert for this article. Our friend Duane Harris over at 90 Feet Of Perfection and The 5.5 Hole has offered his expertise and time on the Walla Walla Padres. You’ll find his input in italics. I also highly recommend both of his sites if you want to dive into some amazing baseball pictures and history.

The Team: Walla Walla was an affiliate of the San Diego Padres from 1973-1982 and played in the Northwest League. In 1981, they finished with the worst record in the 6 team league, winning 29 games and losing 41. But no one cares about that. What they care about is that they had a 21 year old outfielder named Tony Gwynn who finished the season with an excellent .331/.406/.612 slash line while hitting 12 home runs. The 12 dingers have always stood out to me, as that’s pretty awesome for anyone to hit in just 42 games no matter what level of baseball they play. Outside of Gwynn, there were two other familiar names to fans of the 1980s Padres: John Kruk and Greg Booker. I don’t think Kruk needs an introduction, as everyone certainly knows who he is. Greg Booker on the other hand is not as well known. He was a pitcher on the Padres from 1983 to 1989, a Padres coach from 1997 to 2003, and is often remembered due to fact that Jack McKeon trading him to the Twins in 1989. Oh yeah, Jack McKeon was his father-in-law. I guess they didn’t call him “Trader Jack” for no reason. To get back to Walla Walla, the team’s hitting coach was former Padres outfielder, Bobby Tolan. During his major league career, Tolan gave Oscar Gamble a run for his money for the best afro in baseball award, which something that I can 100% get behind. In the end, Tolan’s legacy, at least in Padres circles, is that has the very cool honor of being Tony Gwynn’s (and John Kruk‘s) first hitting coach in professional baseball.

The first Walla Walla cap we’ll take a look at is this 70s example straight from eBay:

While it’s hard to place the date for this particular cap, it can be assumed this cap is from the birth of the team (1973) to possibly around the late 70s. The only source picture I was able to find was a 1973 picture of then-manager Cliff Ditto and an unidentified player: 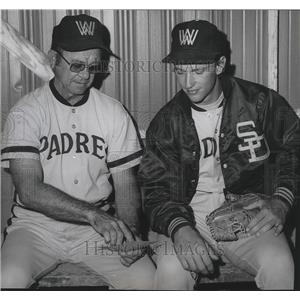 This picture is dated 1973 and makes sense: the two pictured are wearing Padres uniforms from 1972. It was incredibly commonplace for minor league affiliates to utilize hand-me-down uniforms from their parent teams. This is also why a lot of minor league teams of the time had the same name of their parent team: sheer frugality. Also note the player on the right wearing a San Diego satin jacket!

The underbrim is classic green and the sweatband is vintage leather.

Here’s a closer look at the interior and the vintage tagging. Slightly rolled up to the right is the old size/lot tag found on vintage New Era caps until 1987. This particular example is a 7 1/8 and thus is headed to the collection of @tonylosoya.

The Walla Walla Padres made their modern debut thanks to a revival from noted vintage purveyors Ebbets Field Flannels. Via Duane:

What can I say about Ebbets Field Flannels which has not been said before? Plain and simple, they make the best vintage baseball apparel available. Last year Ebbets created the 1981 Walla Walla Padres cap and in my humble opinion, it’s simply amazing.

The first thing everyone should be aware of is that Tony Gwynn played on the 1981 Walla Walla Padres. It’s safe to say that Ebbets decided to create this cap solely based on the fact that he was on the team. This is certainly applicable to the 1983 Las Vegas Stars cap they made earlier this year too. I could be wrong, but I believe that this, along with the 1987 Bellingham Mariners cap they released at the same time, were the first caps from the 1980s that they made. The only reason they made the Bellingham cap is due to the fact they had a 17 year outfielder by the name of Ken Griffey Jr..

The Cap: First and foremost, it’s brown & yellow. Any brown Padres-related cap is awesome and if you don’t agree with this, I’m sorry but you’re wrong. Also, I’m aware that some people who are accustomed to high profile modern caps just can’t get used to Ebbets and their vintage low profile style caps. I understand this, but I’d say that this cap is somewhere in the middle. Not as low crown as some of their other vintage style caps, but certainly not as high as modern New Era caps. I guess this makes sense, since this is a cap from the 1980s.

Just as Duane describes above, this cap is indeed a bit shallower than a New Era product. The shallower crown is usually not a major issue unless you have a larger dome as I do. This makes the cap what I call a “haircut” cap: I can only wear it just after a haircut.

Of note is the WW logo is flat-stitched on this example, which lends a vintage feel to the cap. Raised logos wouldn’t appear on most caps until the mid-90s. The 1973 Walla Walla cap seems to have a very slightly raised WW logo when compared to this cap, however.

As per the vintage look, the rear is free of logos.

The underbrim is satin green; though satin wasn’t used on true on-field caps the material is a nice touch and adds an elevated look to the cap overall. EFF utilizes satin white for the panel taping as well. I still have the cardboard buckram retainer on my cap for storage purposes.

Just recently the Sweets released this throwback cap, and of course I had to add it to my burgeoning Walla Walla collection. 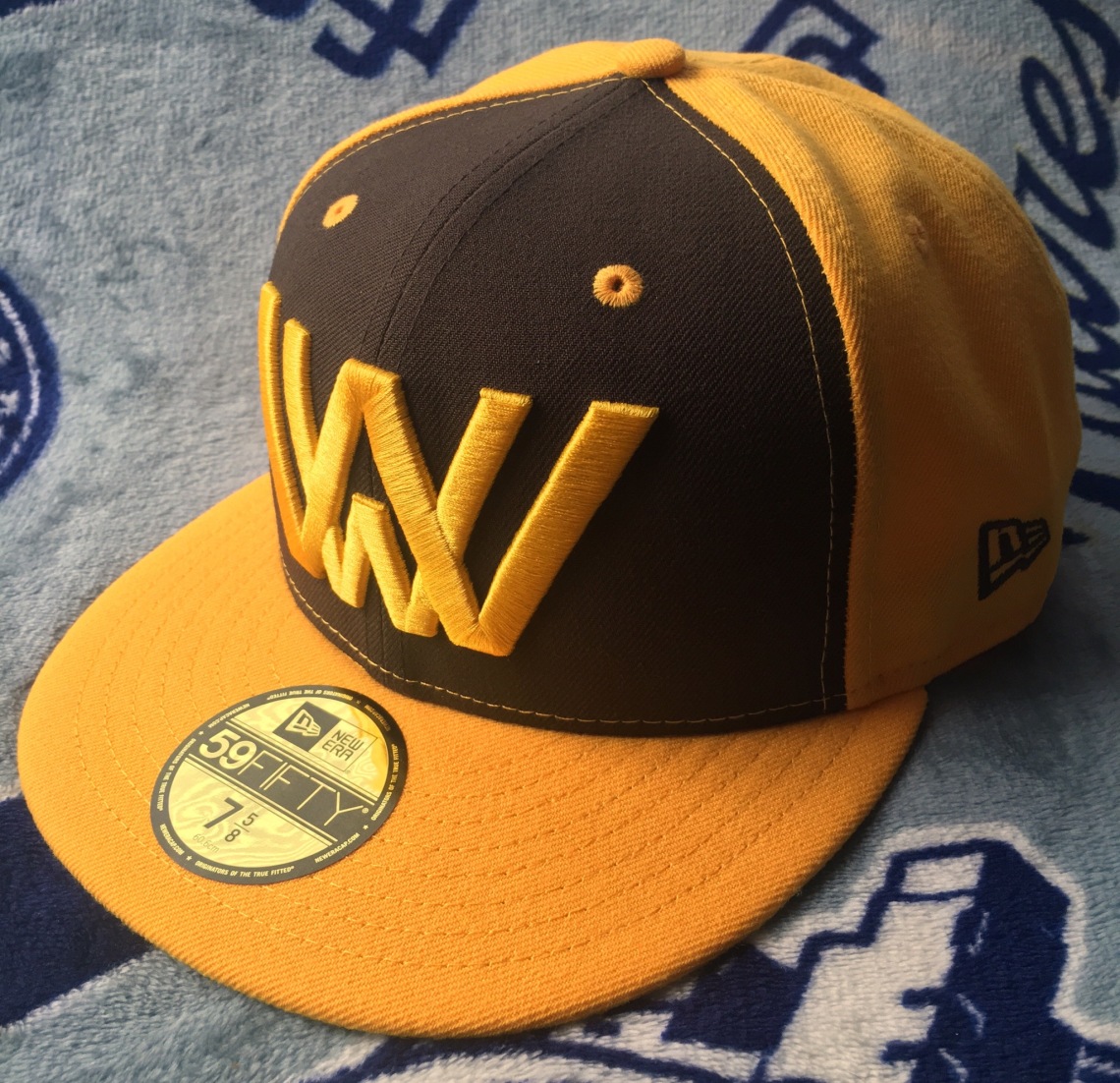 Though the Sweets labeled this cap as a “1973 throwback” this cap more accurately resembles the 1981 remake done by Ebbets Field Flannels. The WW logo is raised on this example and is enlarged to great effect. 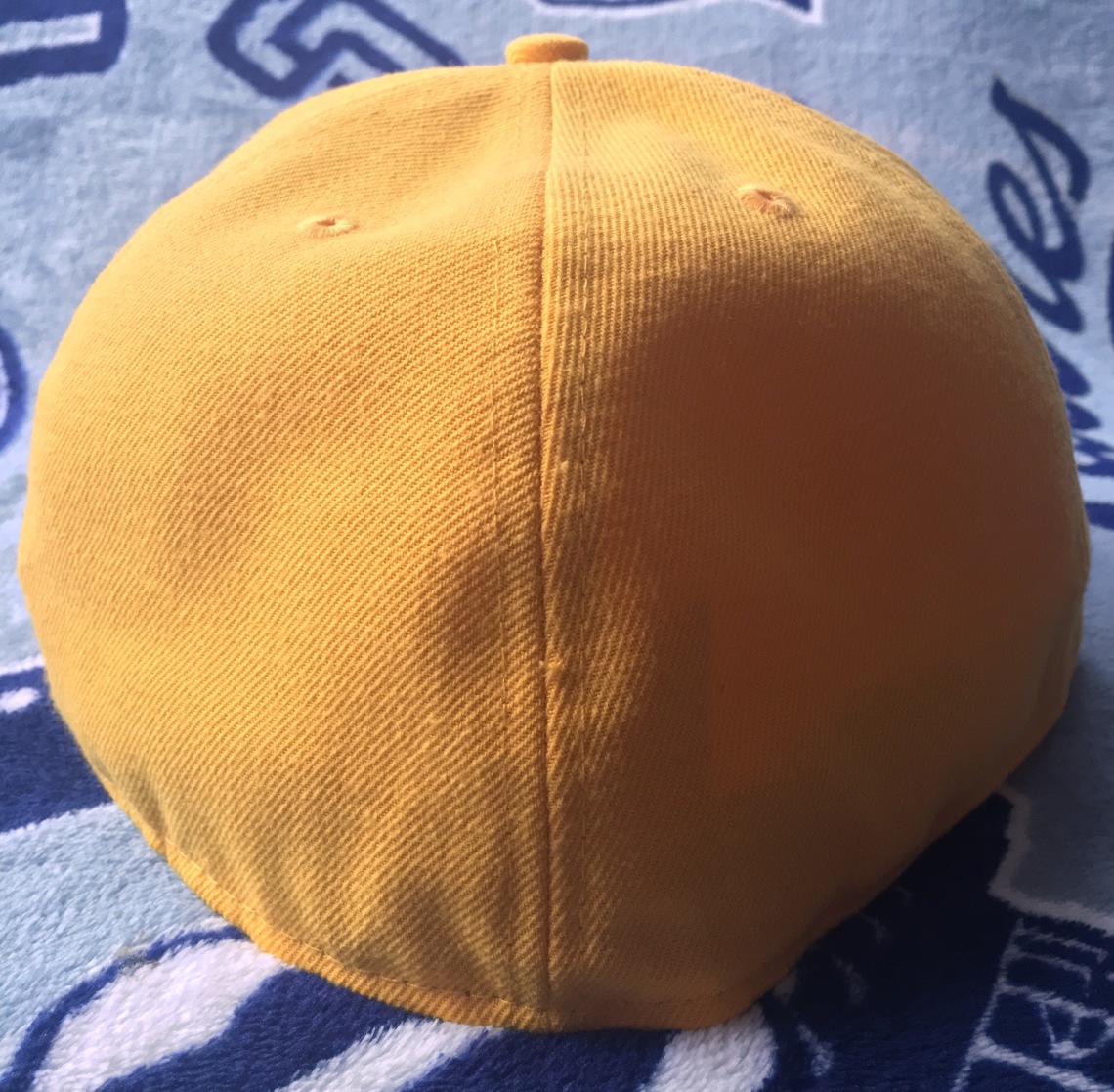 The rear of this example also lacks a logo.

The underbrim is throwback green and the sweatband is black. Found inside are the usual New Era trappings.

While researching for this Capstory I came across an interesting example of a Walla Walla cap that went across the auction block in 2012:

This Walla Walla Padres cap is a meshback adjustable signed by none other than Tony Gwynn himself. The auction suggests that this cap may have been a game-worn cap, which is even odder. Is it possible that the Walla Walla teams of the early 80s wore meshback caps and the Ebbets (and summarily the Sweets) remakes are merely renditions done in a fitted style?

It’s hard to say. The auction for this cap merely suggests that the cap was an on-field cap but doesn’t have any provenance to back up that claim. Trying to match what number Tony might have worn during his time in Walla Walla is another mystery itself: a bobblehead made by the Everett Aqua Sox shows Tony wearing #3 (courtesy of Padres Public). This cap could just be a retail cap marked with a 41 and signed opportunely by Tony.

However, it has been noted that Walla Walla GM Pat Nelly was a penny-pincher. It is a possibility that during her tenure as GM from 1975-1982 that the Padres took a more frugal cap option and went to mesh snapbacks, which are cheaper than fitted models.

It’s hard to say for sure. Pictures from the era are hard to come by. Being a full 3 states and a thousand miles away from any source material outside of Google has only led me to these conclusions.

Good luck digging up another true example from the 70s: your best bet as was mine is via eBay. The Ebbets Field Flannels version was a limited engagement piece as are most of their caps. Ebbets may eventually reissue it in the future. The Sweets version can only be had via their online shop.